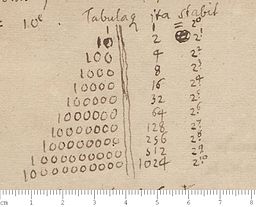 Why bother with other number systems?

We are very used to the decimal system. We learned this system as young kids and use it nearly all the time in our day to day life. Since we are so familiar with it, it does feel "natural" for us to use ten symbols (0, 1, ..., 9) to count.

Besides the fact that most of us happen to have ten fingers and ten toes (which kids often use as support when counting) there's not much "natural" about it, we might as well use more or less symbols to count just as well.

Yet, why would we bother? The decimal system is well-established and feels like a good choice to us.

But there's good reason to change the amount of symbols in some cases:

Knowing this, finding out how many bytes the number 10895 takes is trivial if this number is written in hexadecimal instead of decimal:

This comes in handy when we need to deal with data that is too big to fit into a single byte but we want to access it byte-wise. In that case we can work with each pair of digits independently (for our last example we would work with 2a and 8f independently).

To get a little more familiar with bits and non-decimal numbers, let's pretend that we are the first to invent numbers.

Now we can use them to mean something for our counting system:

Note that this association is arbitrary. We just give each symbol a specific meaning, but which symbol means what and even which symbols we picked doesn't matter, as long as we stick to the meaning once we've defined it.

Okay, but how does that allow us to count?

Well counting up to "two is easy: ★, ♥, ☻, aka zero, one, two.
After this we need to become inventive. We could use more emojis and simply have more symbols for numbers. Now let's say we can't have more than the three symbols (maybe we are communicating via a set of printed tiles and all our tiles are divided into the three symbols).

Another way of counting more things is by chalking up how often we have gone through all of our three symbols. So when we count to five, we would do:

Once we reach "☻", the biggest digit in our system, we know we've gone through all of our symbols, so we remember that we did that full walk through once (or "♥" times, as we express that in our symbols) and start from zero (aka ★) behind it. Any reader who knows the meaning of our symbol system then sees "They went through all the symbols once and that's it, so the number must be the one after "two".

Then for the following numbers we repeat this. Here are the numbers up to ten:

Now there's something convenient about this kind of system. To explain what I mean, let's see how we would convert 3 hours and 35 minutes into minutes.

Surprisingly this kind of works for our emoji-system, system too when you look at the symbols.

Take for example the numbers three, six and nine:

This works for all numbers in between, e.g. seven:

And indeed, this does have a regularity in it, as the amount of symbols we have for a single digit determines how many numbers we can express. Every time we add a digit to a number, we have all the symbols available again for all previous digits, so the number of things doesn't double, but increase by a power of the number of symbols.

For our decimal numbers it's the same but with a base of ten: One digit can express 10, two digits 100 and three digits 1000 different combinations.

This holds true for any number system: Each digit adds one to the exponent while the base is the number of symbols the system has available.

The one weird trick to convert numbers to and from decimal:

Now, different number systems can be useful but reading numbers is hard, when they aren't decimal, isn't it?

Conveniently there's one little trick that, with some practice, makes it easier to read numbers in any arbitrary system, using simple multiplication and addition.

From your math lessons you may remember that any number to its zero-th power is always one, so x^0 = 1 no matter which natural number we use for x.

We can generalize the way we find the value of a number in any system, given that we know its base:

Starting from the right, multiply the first digit with base^0, the next digits with base^1, base^2, base^3 and so on.

Here are some examples:

It works the other way around as well:

To find the representation of a decimal number in any other base, you find the largest power of the base to fit into that number, which gives you the left-most digit of the other system, then you repeat that step for the rest until you are done.

Now that we have seen that number systems can use an arbitrary number of symbols to encode any natural number without much trouble and how we can convert between our familiar decimal system and systems with any other number of symbols, we can pick whatever system is convenient for working with different types of data and represent it in a way that is easiest for the task at hand.

For instance, as two hexadecimal digits neatly fit the data in a single byte, we may use a hex editor when looking at binary files when we wish to see the individual bytes.

Equipped with this, we can take on working with binary data of any kind: images, videos, audio files and others.