After booting, the BIOS of the computer reads 512 bytes from the boot devices and, if it detects a two-byte "magic number" at the end of those 512 bytes, loads the data from these 512 bytes as code and runs it.

This kind of code is called a "bootloader" (or "boot sector") and we're writing a tiny bit of assembly code to make a virtual machine run our code and display "Hello world" for the fun of it. Bootloaders are also the very first stage of booting an operating system.

What happens when your x86 computer starts

You might have wondered what happens when you press the "power" button on your computer. Well, without going into too much detail - after getting the hardware ready and launching the initial BIOS code to read the settings and check the system, the BIOS starts looking at the configured potential boot devices for something to execute.

It does that by reading the first 512 bytes from the boot devices and checks if the last two of these 512 bytes contain a magic number (0x55AA). If that's what these last two bytes are, the BIOS moves the 512 bytes to the memory address 0x7c00 and treats whatever was at the beginning of the 512 bytes as code, the so-called bootloader. In this article we will write such a piece of code, have it print the text "Hello World!" and then go into an infinite loop.
Real bootloaders usually load the actual operating system code into memory, change the CPU into the so-called protected mode and run the actual operating system code.

A primer on x86 assembly with the GNU assembler

To make our lives a little easier (sic!) and make it all more fun, we will use x86 assembly language for our bootloader. The article will use the GNU assembler to create the binary executable file from our code and the GNU assembler uses the "AT&T syntax" instead of the pretty widely-spread "Intel syntax". I will repeat the example in the Intel syntax at the end of the article.

For those of you, who are not familiar with x86 assembly language and/or the GNU assembler, I created this description that explains just enough assembly to get you up to speed for the rest of this article. The assembly code within this article will also be commented, so that you should be able to glance over the code snippets without knowing much about the details of assembly.

Getting our code ready

Okay, so far we know: We need to create a 512 byte binary file that contains 0x55AA at its end. It's also worth mentioning that no matter if you have a 32 or 64 bit x86 processor, at boot time the processor will run in the 16 bit real mode, so our program needs to deal with that.

Let's create our boot.s file for our assembly sourcecode and tell the GNU assembler that we'll use 16 bits:

Ah, this is going great! Next up we should give us a starting point for our program and make that available to the linker (more on that in a few moments):

Note You can call your label whatever you wish. The standard would be _start but I chose init to illustrate that you can call it anything, really.

Nice, now we even got an infinite loop, because we keep jumping to the label, then jump to the label again...

Time to turn our code into some binary by running the GNU assembler (as) and see what we got:

Woah, hold on! Our output is already 784 bytes? But we only have 512 bytes for our bootloader!

Well, most of the time developers are probably interested in creating an executable file for the operating system they are targeting, i.e. an exe (Windows), elf (Unix) file. These files have a header (read: additional, preceeding bytes) and usually load a few system libraries to access operating system functionality.

Our case is different: We want none of that, just our code in binary for the bios to execute upon boot.

Usually, the assembler produces an ELF or EXE file that is ready to run but we need one additional step that strips the unwanted additional data in those files. We can use the linker (GNU's linker is called ld) for this step.

The linker is normally used to combine the various libraries and the binary executables from other tools such as compilers or assemblers into one final file. In our case we want to produce a "plain binary file", so we will pass --oformat binary to ld when we run it. We also want to specify where our program starts, so we tell the linker to use the starting label (I called it init) in our code as the program's entry point by using the -e init flag.

When we run that, we get a better result:

Okay, three bytes sounds much better, but this won't boot up, because it is missing the magic number 0x55AA at bytes 511 and 512 of our binary...

We can use the the preprocessor directive .fill from as to do that. The syntax is .fill, count,size,value - it adds count times size bytes with the value value wherever we will write this directive into our assembly code in boot.s.

But how do we know how many bytes we need to fill in? Conveniently, the assembler helps us again. We need a total number of 510 bytes so we will fill 510 - (byte size of our code) bytes with zeroes. But what is the "byte size of our code"? Luckily as has a helper that tells us the current byte position within the generated binary: . - and we can get the position of the labels, too. So our code size will be whatever the current position . is after our code minus the positon of the first statement in our code (which is the position of init). So .-init returns the number of generated bytes of our code in the final binary file...

We're getting there - still missing the final two bytes of our magic word:

Oh wait... if the magic bytes are 0x55aa, why are we swapping them here?
That is because x86 is little endian, so the bytes get swapped in memory.

Now if we produce an updated binary file, it is 512 bytes long.

You could theoretically write this binary into the first 512 byte on a USB drive, a floppy disk or whatever else your computer is happy booting from, but let's use a simple x86 emulator (it's like a virtual machine) instead.

I will use QEmu with an x86 system architecture for this: 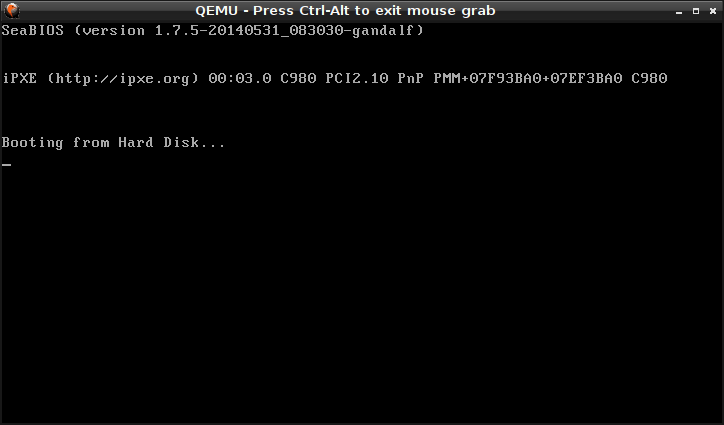 The fact that QEmu stops looking for bootable devices means that our bootloader worked - but it doesn't do anything yet!

To prove that, we can cause a reboot loop instead of an infinite loop that does nothing by changing our assembly code to this:

This new command ljmpw $0xFFFF, $0 jumps to the so-called reset vector.
This effectively means re-executing the first instruction after the system boots again without actually rebooting. It's sometimes referred to as a "warm reboot".

Using the BIOS to print text

Okay, let's start with printing a single character.
We don't have any operating system or libraries available, so we can't just call printf or one of its friends and be done.

Luckily, we have the BIOS still around and reachable, so we can make use of its functions. These functions (along with a bunch of functions that different hardware provides) are available to us via the so-called interrupts.

In Ralf Brown's interrupt list we can find the video interrupt 0x10.

A single interrupt can carry out many different functions which are usually selected by setting the AX register to a specific value. In our case the function "Teletype" sounds like a good match - it prints a character given in al and automatically advances the cursor. Nifty! We can select that function by setting ah to 0xe, put the ASCII code we want to print into al and then call int 0x10:

When we run as and ld to get our updated bootloader, QEmu shows us this: 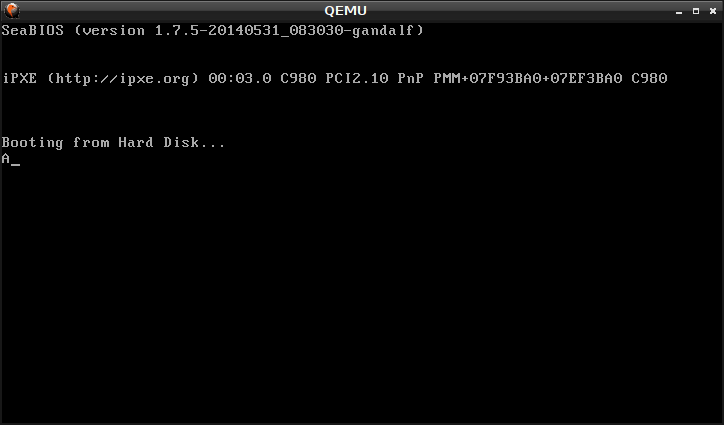 We can even see that the cursor blinks at the next position, so this function should be easy to use with longer messages, right?

To get a full message to display, we will need a way to store this information in our binary. We can do that similar to how we store the magic word at the end of our binary, but we'll use a different directive than .byte as we wanna store a full string. as luckily comes with .ascii and .asciz for strings. The difference between them is that .asciz automatically adds another byte that is set to zero. This will come in handy in a moment, so we chose .asciz for our data.
Also, we will use a label to give us access to the address:

We have one new feature in there:

The first line loads the address of the first byte into the register bx (we use the entire register because addresses are 16 bit long).

The second line then loads the value that is stored at the address from bx into al, so the first character of the message ends up in al, because bx points to its address.

But now we get an error when running ld:

Dang, what does that mean?

Well it turns out that the address at which msg is moved in the ELF file (boot.o) doesn't fit in our 16 bit address space. We can fix that by telling ld where our program memory should start. The BIOS will load our code at address 0x7c00, so we will make that our starting address by specifying -Ttext 0x7c00 when we call the linker:

QEmu will now print "H", the first character of our message text.

We could now print the entire string by doing the following:

Let's put it all together:

Let's look at this new code in QEmu: 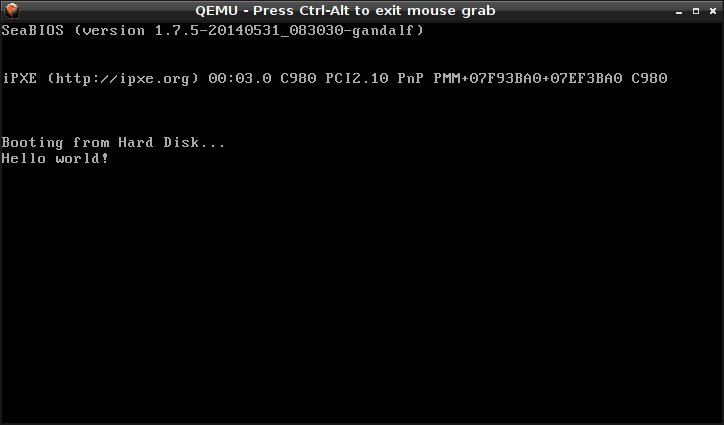 It prints our message by looping from print_char to jmp print_char until we hit a zero-byte (which is right after the last character of our message) in si. Once we find the zero byte, we jump to done and halt execution.

The Intel syntax edition and nasm

As promised, I will also show you the alternative way of using nasm instead of the GNU assembler.

First things first: nasm can produce a raw binary by itself and it uses the Intel Syntax:

So here is the nasm-compatible version of the previous code:

(Thanks to Reddit user pahefu for pointing out a typo here!

After saving it as boot.asm it can be compiled by running nasm -o boot2.bin boot.asm.

Note that the order of arguments for cmp are the opposite of the order that as uses and [org] in nasm and .org in as are not the same thing!

nasm does not do the extra step via the ELF file (boot.o), so it won't move our msg around in memory like as and ld did.

Yet, if we forget to set the start address of our code to 0x7c00, the address that the binary uses for msg will still be wrong, because nasm assumes a different start address by default. When we explicitly set it to 0x7c00 (where the BIOS loads our code), the addresses will be correctly calculated in the binary and the code works just like the other version does.